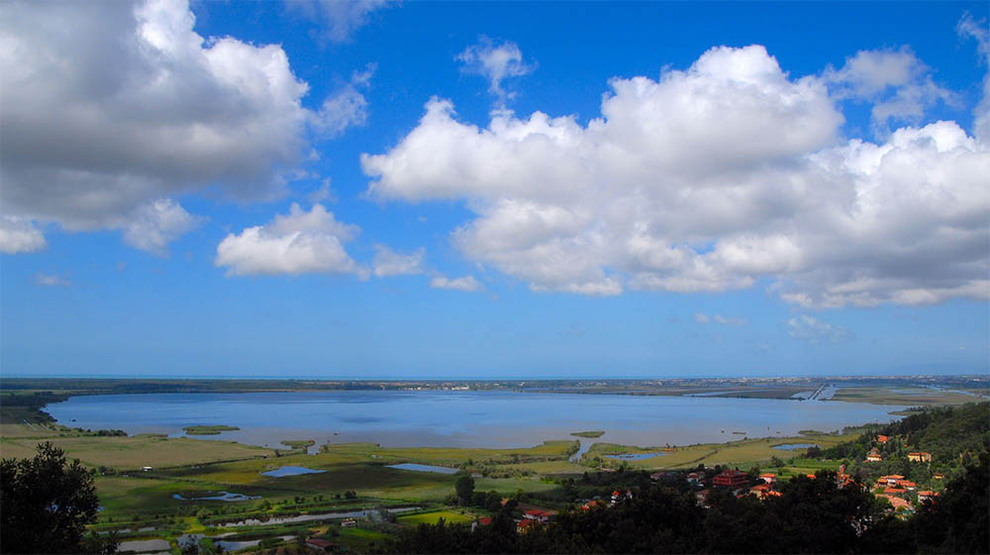 Lake Massaciuccoli, luxury villas and farmhouses for sale, including nature, history and music

In Tuscany, the Massaciuccoli lake

Lake Massaciuccoli, in the southern part of Versilia between the provinces of Lucca and Pisa, is an unforgettable encounter with the landscape and nature. Villas and farmhouses of prestige for sale, in an authentic living museum where life, its rhythms and its manifestations, are still ancient and distant, on which it is enough to lay eyes to find architectures and drawings to approach an infinite book.
Sailing on the lake, with organized tours and guided to the oasis of Lipu, one experiences unique experiences in ever-changing environments: sometimes crowded with herds of birds in their frenetic and apparently quarrelsome flights for a place to perch on; sometimes inhabited by some solitary specimens absorbed in his meditations. Through zones and angles suspended in absolute silence, interrupted by the rising in flight of an animal frightened by our presence, or surprised by the sudden appearance at the sight of a clear buzzing and animated life.

Massaciuccoli and its lake are also synonymous with history.
With its beautiful archaeological area located on the shores of the lake and includes the villa, the building with the mosaic and the museum. Here you can visit the remains of the villa of the Venulei family, built at the beginning of the 1st century AD, of which the monumental thermal complex is preserved, situated in a panoramic position from which you can admire the lake and the coast to the sea.
Further down the exhibition pavilion, there is a small spa district with some rooms, part of the heating system and the floor mosaic of the frigidarium, decorated with fantastic animals in black and white tiles.
Broker Exclusive Real Estate has a wide choice of houses for sale located a few steps from the Roman baths, as beautiful luxury villas for sale and characteristic Tuscan farmhouses for sale with lake and sea view.

Between the composer Giacomo Puccini and the lake of Massaciuccoli it was love at first sight: the musician immediately fell in love with the lake and the small village on its shores, which even welcomed him with a welcoming committee upon his arrival in 1891, in small train station.
Here Puccini founded the Club della Bohème with local artists and soon became one of the main actors of the artistic life of the late nineteenth century, first local, then European, during the years of great cultural ferment that crosses Europe, finding in these places the meeting point between these enthusiastic currents of cultural exchange and the pure sensations offered by the contact with the inspiring nature.
Puccini lives in Torre del Lago for thirty years, during which he cultivates his two greatest passions: music and hunting. In his house in front of the lake he composes all his major works, including Tosca (1900), Madama Butterfly (1904), La Fanciulla del West (1910), La Rondine (1917) and Il Trittico (1918).
The Puccini Festival every year fulfills its old desire to listen to his works outdoors on the lake, a large outdoor theater of 3,400 seats, on the shore of Lake Massaiuccoli, surrounded by greenery right in front of the Master's House Museum Puccini where the remains of the musician are kept and where you can admire finds and memorabilia of life and the glorious artistic story of Puccini.
Today the Master's works are staged on the banks of the lake he loved so much, in the heart of the town that, in his honor, has changed its name to Torre del Lago Puccini, in a festival that every year since 1930, in the months of July and August, it becomes one of the most anticipated events of the rich cultural life of Tuscany and the most important Italian opera festival in addition to the only one in the world dedicated to the famous composer.
A prestigious event able to attract thousands of spectators from all over the world, under the direction of important conductors and famous directors of the Puccini masterpieces by Madama Butterfly, Turandot, La Bohème, Tosca and Manon Lescaut.

PRESTIGIOUS VILLAS AND FARMHOUSES FOR SALE IN TUSCANY

Broker Exclusive Real Estate offers villas and farmhouse for sale on the lake of Massaciuccoli, Tuscany, with lake and sea view.

Casale La Merenda
Prestigious farmhouse for sale in Tuscany, is one of the rare properties on the market today that have kept intact all their immense charm of ancient stone farmhouse, built and designed reflecting the tastes and design of the Tuscan tradition.

Ville Mondella
Luxury villa for sale in Tuscany with stunning views of Lake Massaciuccoli and the sea, nestled in a land of nine and a half hectares on the first hill slopes, this property enjoys an exclusive location and finishes of the highest level.

Casale Anthea
Prestigious farmhouse for sale in Tuscany, where a cozy atmosphere pervades us in this beautiful late nineteenth century farmhouse with swimming pool, surrounded by greenery and with an enviable view of Lake Massaciuccoli and the Versilian coast.

Villa Tosca
Luxury villa for sale in Tuscany, where to live surrounded by greenery and suspended between water and sky, in this beautiful villa result of a skilful recovery, carried out with extreme taste and attention to detail, of an ancient sheepfold of the 1500s, merging the heat of history and the comfort of technological innovation.