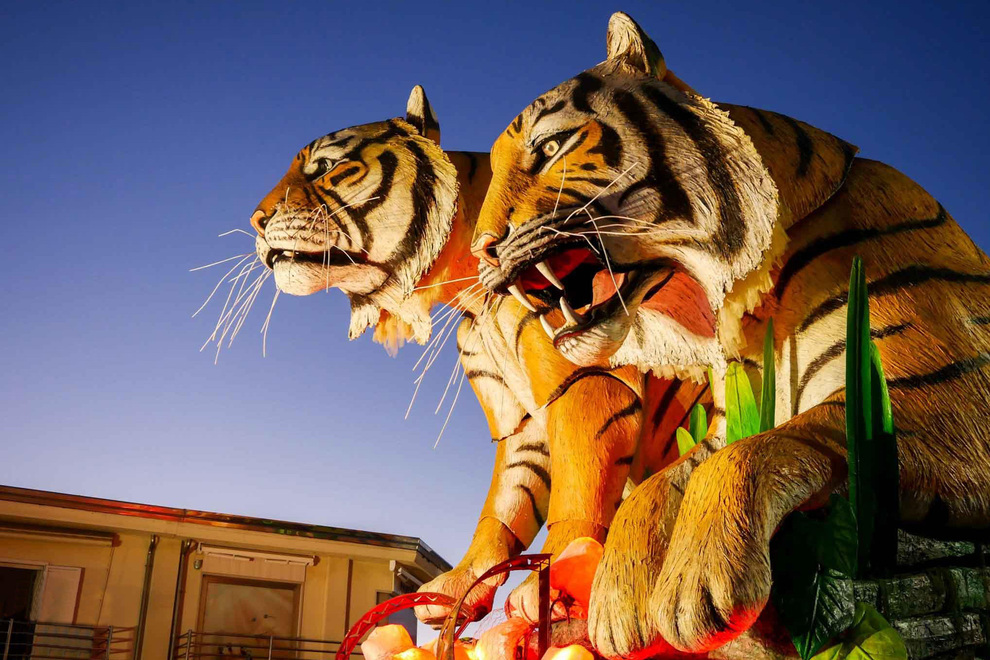 Carnival of Viareggio, prestigious properties on the promenade

The Carnival of Viareggio, Tuscany

The first parade of festively decorated carriages in the historic Via Regia, in the heart of the old town, is dated 1873.

It was the first edition of the great show that is today the Viareggio Carnival. The idea of ??a parade to celebrate Carnival blossomed among the young people of Viareggio who used to go to the Casino cafe at the time. It was February 24, 1873 and a parade was planned for the following day, Shrove Tuesday.

From that first nucleus the Carnival of Viareggio developed as it is known today: spectacular event among the most beautiful and grandiose in the world.

The fame of the Corso Mascherato in Viareggio has grown hand in hand with the growth in the size of the allegorical floats. At the end of the century, triumphal floats appeared on the parade, monuments built in wood, scagliola and jute, modeled by local sculptors and set up by carpenters and blacksmiths who worked in the shipyards in the dock. Thanks to the transfer of the parade circuit from the Via Regia to the Promenade at the sea, at the beginning of the twentieth century, the Carnival of Viareggio show enjoyed an extraordinary, yet spacious, stage that stimulated the imagination and creativity of the Master tankers.

Thus was born the Carnival of Viareggio, which since then draws thousands of fans from all over Italy to the city of Versilia every year.

The undisputed protagonists are the allegorical papier-mâché floats: they are the largest in the world, move thanks to ingenious mechanisms and are animated by the music and dances of hundreds of masked figures.The floats represent the characters of politics, culture and of the show: with satire and irony the Carnival of Viareggio faces the hottest topics of the moment and laughs about it.

Today the Carnival of Viareggio is even more protagonist. Every year on Shrove Tuesday, he returns live on national television on RaiTre, to burst into television screens throughout Italy with the spectacular joy of his allegorical floats. Every year, a parade of distinguished guests, politicians, sports and entertainment personalities, has come and comes to Viareggio to admire their papier-mâché effigy, as well as at each Masquerade Course of each edition of the Carnival, hundreds of thousands of people have decreed and decree the success of the event. The Carnival of Viareggio fills a whole month with daytime and nighttime parties, with parades of bloody floats, local festivals, masked parties and festivals of all kinds.

In this regard, Broker Real Estate offers to admire the walk from its home in the most exclusive area of ??Viareggio, a place that hosts this splendid and indispensable event every year.

Refined apartment for sale in Viareggio, located in the most exclusive and appreciated area of ??the promenade, facing the bathing establishments and the beach.Renovated in 2016, the apartment is in excellent maintenance conditions and is located on the first floor of a building dating back to the mid-1950s, consisting of only three residential units.The apartment is spread over a gross surface of 98 square meters, and consists of a spacious entrance hall with adjoining convenient storage room, a kitchen, a bright living-dining room overlooking the promenade.

And if besides the vision of the famous Carnival of Viareggio, we want to be enchanted also by the sea view, Broker Real Estate offers two prestigious properties.

The uniqueness of owning, not a simple apartment by the sea, but an exclusive property directly on the beach and on the sea, with an open view that sweeps from the Viareggio pier to the Ligurian coast, encompassing the entire Versilia coast framed in the distance by the Apuan Alps .The newly built apartment, for a total of about 160 square meters, is spread over two levels of equal size, located on the first and second floors of a small building of only two real estate units, with direct access from the Viareggio promenade.

An exclusive property directly on the sea, with two large terraces on the beach and promenade side of Viareggio, as well as excellent quality systems and internal finishes.The seafront apartment for sale in Viareggio is located on the first and last floor, of a classic construction from the early 1900s, facing the bathing establishments.The apartment, developed on an area of ??about 130 square meters, is composed of entrance, large and bright living room paved with parquet, with double facing, on one side with sea view and on the other connected through French windows to the beautiful terrace of about 25 square meters in front of the famous Viareggio promenade.

Previous article Historic houses for sale in Tuscany, on the hills of Pisa
Next article Pietrasanta, between prestigious properties and internationally renowned artists
Linked properties

Appartamento Promenade - Viareggio UP TO € 1MLN

Appartamento Mistral - Viareggio UP TO € 1MLN